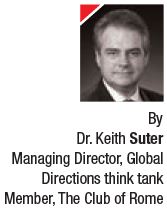 National security used to mean a country protecting itself from other countries. More recently, with the rise of Islamist extremism, there are also now asymmetrical struggles between some countries and terrorist groups.

Since the 1970s some of us have argued that “national security” should be seen in an even broader context. The object of national security is to protect a country – the emphasis should be on the objective and not the means of attack. A focus on weaponry will not be sufficient if, for example, the borders are overrun by a mass migration of people fleeing their disrupted environment.

Lord John Browne, then Chairman of British Petroleum, explained this problem well in May 1997 that “the time to consider the policy dimensions of climate change is not when the link between greenhouse gases and climate change is conclusively proven, but when the possibility cannot be discounted and is taken seriously by the society of which we are a part. We in BP have reached that point.”

This article argues that climate change is a much bigger threat to national security than is currently reflected in the Australian media and political debate.

Climate change is a complex policy problem. Perhaps the most complex in our lifetime. It is not simply an “environmental” problem. No single academic discipline is able to handle all the issues created by it. Indeed, there were not any “climate science” university degrees until recently. Most scientists have come to this problem from other disciplines.

There is the issue of coastal erosion. Climate change may result in rising sea levels and greater weather turbulence. Carteret Island in the Solomon Sea, to Australia’s north-east, is an atoll being slowly reclaimed by the sea. Some low lying islands off Vanuatu and Kiribati have also been evacuated as a precaution.

Closer to Australia is the Indonesian capital city of Jakarta (with nearly 30 million people), which is sinking faster than any other big city on the planet. Climate change aggravates a host other problems, such as the lack of city planning, limited sanitation facilities, political corruption and ethnic tensions…Click HERE to read full article.