Counter drone technology company, Department 13 is pleased to announce the first sale of its MESMER counter drone solution to an Australian customer.

EPE, Department 13’s strategic partner in the Australasian region, has purchased MESMER Version 1.0 on behalf of an end customer as an initial order following a series of successful demonstrations with the end customer.

The sale consists of hardware required to run the proprietary software, enabling the client to control the outcome of a drone engagement. MESMER v1.0 hardware and first year software licenses range from US$250,000 per unit (depending upon configuration and enhanced capabilities) with recurring annual license fees. EPE will provide training and ongoing sales support in Australia for this client and future clients under a distribution agreement.

MESMER is adaptable and can be enhanced with expanding capabilities against new potential threats via software patch as part of annual license fees and support. The hardware can be similarly upgraded as and when new system upgrades occur.

This is the first sales contract through EPE and, as recently announced, we expect a number of additional contracts in the near future following successful demonstrations held over two weeks in March 2017 across Sydney, Canberra, Brisbane, the Gold Coast and Wellington. The demonstrations were well attended by various potential customers including State and Federal Police, Defence Forces, Federal and State Government agencies, major event organisers and large commercial property owners.

This first end customer selected MESMER for its unique, non-jamming, non-kinetic drone mitigation technology, enabling an effective and safe method of protecting critical infrastructure and personnel from dangerous drones. The Company’s patented protocol manipulation technology, unique to MESMER, is low power (below 1 Watt), does not impact non-targeted communications signals and accordingly complies with the Australian Communications and Media Authority (ACMA) and New Zealand Radio Spectrum Management (RSM) regulations. In addition, MESMER has been cleared under EAR99 for technology export under US Government regulations and is the only counter drone solution with a US export license.

This end customer’s details and commercial terms remain in confidence under an Australian security
requirement.

The EPE contract win follows the recent first US license sale to Booz Allen Hamilton Inc. as announced on
16 March 2017.

“This marks our first MESMER system sale in the Australian market following very successful
demonstrations in Australia and New Zealand from which we expect to announce further sales in the
near future. EPE is one of several strategic partners globally and has been a supplier of leading edge
security technology and solutions to the Australian Defence Forces, Federal and State Police over more
than 15 years.”

“Our pipeline of potential sales has grown significantly across both commercial and defence sectors as
well as geographically across the globe, including Singapore, where successful demonstrations were
recently held following requests by potential customers at the Milipol Asia-Pacific Homeland Security
2017 conference.”

Goldman Sachs has estimated the total spending over the Global Drone Market from 2016 to 2021 to
exceed US$100 billion whilst Executive Business forecasts the Global Counter Drone Defense market to
reach US$1.14 Billion by 2022 with a compound annual growth rate (CAGR) of over 23%. 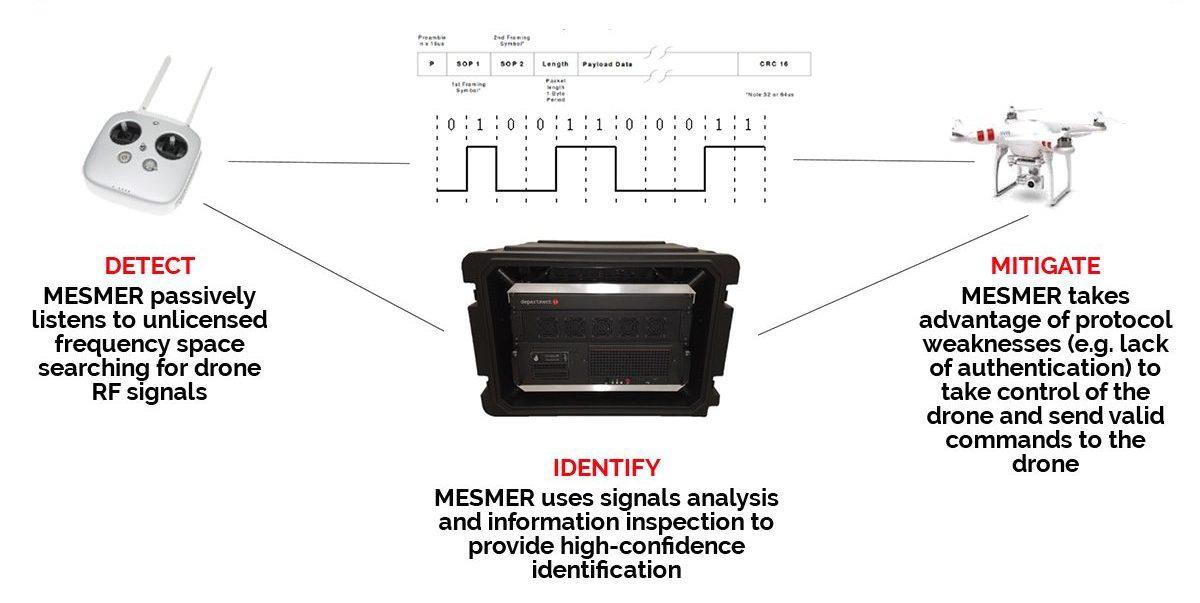 ABOUT DEPARTMENT 13
Department 13 (D13) was founded in Virginia in 2010 by a team of former military operators, scientists
and engineers who apply proprietary innovative advanced technology to emerging requirements. D13 is
developing cutting-edge software and communication systems that have the potential to transform the
networking and communication fields as well as current applications in drone defense, mobile phone IT
security and secure enhanced Android phone systems. D13 is engaged with multiple counter UAS
projects to provide strategic solutions for civil, military and commercial security requirements. D13 has
13 patents and 22 patent applications in the development of wireless protocol manipulation and
communication networking software with applications in drone defense, local area and wide area
cellular communications and networking, enhanced data bandwidth for all digital communications,
cyber security for mobile devices and sophisticated RF technology applications (radiometrics). For more
information about D13, please visit www.department13.com or follow us on Twitter (@D13ASX),
LinkedIn and YouTube.

ABOUT EPE
EPE supports defence forces, law enforcement and other government agencies in the Asia Pacific region
through the delivery of force protection and homeland security solutions. EPE are former counter IED
specialists and military operators with real world operational experience. EPE specializes in counter IED,
EOD, force protection ECM and counter drone, intelligence, surveillance and reconnaissance technology.
EPE understands the demands placed on equipment and operators in the current ‘high-threat’
environments in which they may be deployed. EPE also understands the demands of the training and
preparation required for operations. Our aim is to source the very best range of battle-proven
equipment to help us deliver to our customers, a comprehensive and sustainable capability to meet
evolving threats. www.epequip.com.