Group-IB has found out that phishing kits are the new bestsellers of the underground market, with the number of phishing kit ads on underground forums and their sellers having doubled in 2019 compared to the previous year. The growing demand for phishing kits is also reflected in its price that skyrocketed last year by 149 percent and exceeded $300 per item. Last year, phishing kit creators’ favorite brands were Amazon, Google and Office 365.

Phishing kits represent archive files with a set of scripts that ensure the work of a phishing website. This toolset enables attackers with modest programming skills carry out massive malicious campaigns, which is the reason why they represent a point of interest for cybersecurity researchers. The detection of a phishing kit not only helps to discover hundreds or even thousands of phishing pages, but can also serve as a starting point of an investigation to identify the toolkit’s creator and bring them to justice.

Thus, according to Group-IB Threat Hunting Intelligence team, the number of phishing kit sellers active on underground forums increased by over 120% in 2019 year-on-year. Relatively the same growth showed the number of online ads posted on such web resources.

In 2019, the average price of a phishing kit more than doubled compared to the year before and totaled $304, with the prices generally ranging between $20 and $880. In comparison, in 2018, the prices for a phishing kit varied between $10 and $824, while the average price stood at $122. According to Group-IB experts, the price for phishing kits depends on their complexity – the quality and the number of phishing pages, as well as the existence of side services like “technical support” on behalf of their creator. 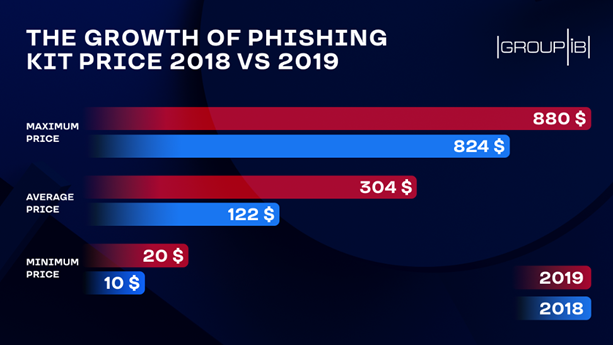 What is remarkable – some of the phishing kits were offered free of charge, which was explained not by human generosity but likely by backdoors contained in them, which enabled their creators to access all the gathered data.

Detect and neutralize: how to hunt for phishing kits?

Meanwhile, the process of phishing kit detection is becoming more and more challenging, with the statistics for the previous year showing a frustrating trend: hackers grow more cautious in their malicious activities since only 113,460out of 2.7 million phishing pages detected contained a phishing kit. Cyber crooks normally remove them or resort to various means to hide them and prevent from being detected by cybersecurity researchers.

To attract more buyers, the developers of phishing kits usually make them targeting well-known brands with large audience – the fact that potentially should facilitate the conduct of fraudulent campaigns for the toolkit future owner. The brands most commonly found in phishing kits in 2019 were Amazon, Google, Instagram, Office 365, and PayPal. Top 3 “online markets” for trafficking in phishing kits last year were Exploit, OGUsers, and Crimenetwork.

“Phishing kit creators are the driving force of this criminal marketplace – one individual might be behind the creation of hundreds of phishing pages and, even worse, behind the compromise of the personal information of thousands of people,” Group-IB CTO and Head of Threat Hunting Intelligence team Dmitry Volkov said. “Therefore, the fight against phishing kit creators should be at the core of the struggle to eradicate phishing. In its practice, Group-IB had a number of investigations that resulted in the deanonymization of phishing kit creators. By sharing such info with relevant law enforcers and ensuring the apprehension of cybercrooks, Group-IB seeks to prevent the further spread of ‘disease’ and fight not against its symptoms, phishing pages, but against its causative agent – phishing kit makers.”