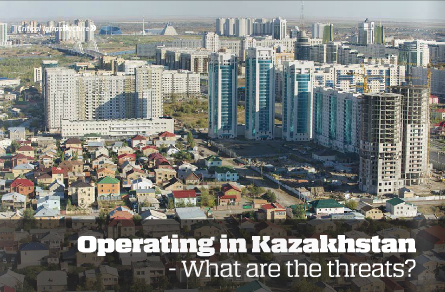 Mention Kazakhstan to most westerners and they would probably respond with a ‘Borat’ comment and most would not know where it is located. So where is it and why is it of interest to the security industry?

Kazakhstan is a former soviet state located to the East of the Caspian Sea and directly south of Russia with China to its east and the ‘Stan’ countries directly to its south, obtaining independence from Russia in 1991. By land mass it is the 9th largest country in the world and although based in Central Asia prefers to describe itself as an Eurasian country due to the western regions being located in Europe.  President Nazarbayev has been repeatedly elected since independence and recently polled 90% plus in elections this year. Kazakhstan is viewed by many as a calm stable democracy who is friends with all and enemy to none.

So why is it of interest to security professionals? Simply put, oil and gas! The oil and gas industry is the main reason for Kazakhstan’s economic success over the past 20 years and in order to maintain its effectiveness joint ventures have been created with international partners. The international providers have to rely upon the expertise of expatriates and therefore in order to protect them there is a need to understand what ‘real’ threats actually exist.

The following are what I believe to be the real threats that exist when operating in Kazakhstan.

Corruption
Corruption is described as endemic and spreads from the highest levels of government to lower level civil servants and police. There is anecdotal evidence to support this and Transparency International ranks Kazakhstan as the joint 126th (out of 175 declared countries) most corrupt countries in the world.

Although there has never been any direct accusations of corruption levelled at the President many of his family and wider associated have been implicated in corruption and with political positions being given through patronage as opposed to competency the opportunities and ability for corrupt practises not only exist but flourish.

Organised Crime
Whilst organised crime goes hand in hand with corruption it is not as visible as in other countries; however that doesn’t mean that it doesn’t exist. Kazakhstan sits on the northern supply route for heroin leaving Afghanistan destined for Europe and China ($20 billion dollar p.a.) but as it falls on the old ‘Silk Route’ other commodities are also smuggled including people, electronic goods and minerals.

Where heroin reaches the Kazakh markets there is an increase in drug related deaths, street crime and gang violence, although this is similar to many UK cities. Whilst there is an active sex industry it does not appear to be controlled by particular groups and many prostitutes operate with a ‘roof’, which is a form of protection offered by police; indeed in recently publicised cases brothels disguised as ‘saunas’ have been run by police officers… Click HERE to find out more about this article