Sikorsky, A Lockheed Martin Company has announced the relocation of its Forward Stocking Location (FSL) from Australia’s East Coast in Brisbane to the West Coast in Perth. 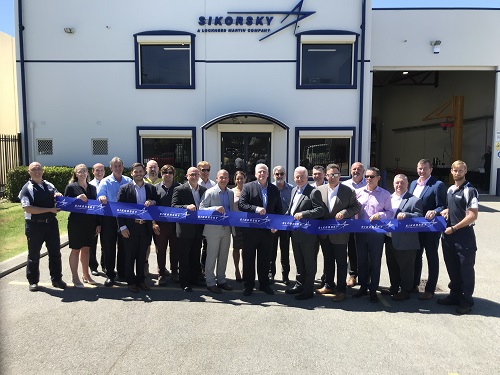 The Brisbane FSL opened in 2016 to better support the flow of parts to customers in Asia-Pacific’s remote region.  The Forward Stocking Location will continue being operated by Sikorsky Australia, the regional subsidiary of the U.S.-based company Sikorsky, providing after-market support including airframe, component, and rotor blade maintenance along with material sales, design engineering, non-destructive testing, and maintenance training throughout the Asia Pacific.

Sikorsky anticipates that moving the FSL from Brisbane to Perth will further improve the availability of S-92® helicopters in the critical oil and gas regions in Western Australia and throughout the region. The company plans to increase stocking volumes at the FSL in Perth throughout the year.

The move is welcomed by operators who service the oil and gas industry across the Asia Pacific, including on Australia’s Western Coast.

“The move of the Sikorsky FSL to Perth has been seamless,” said Andrew Cridland, managing director, Babcock Aviation Offshore Australasia. “Babcock provides a range of services to blue chip oil & gas companies from a number of remote locations in Australia, as well as in Dili, Timor-Leste, and we look forward to continued service and support from Sikorsky’s new facility in Western Australia.”

“Having an FSL in Western Australia is extremely beneficial for operators like Bristow and the businesses that rely upon our aircraft,” said Neil Seabrook, engineering manager for Bristow Asia Pacific Operations. “Bristow provides 24/7 services to the oil and gas industry in Western Australia. Having an FSL in the region where we can communicate and work in the same time zone will have major economic and business and efficiency benefits, not just for us, but also for our oil and gas customers.”

“Having a new FSL close to our headquarters in Perth and closer to many of our bases and offshore operations will help us better serve our customers throughout the region,” said CHC’s Regional Director for the Asia Pacific market, Vince D’Rozario. “This will help us continue to ensure our fleet has efficient and effective access to the parts necessary to keep us flying safely and efficiently.”

“The new Forward Stocking Location in Perth will be instrumental in supporting our fleet and demonstrates Sikorsky’s commitment to the Australian offshore oil and gas market,” said PHI, Inc. President and General Manager, International Oil and Gas, Keith Mullett.

Australia has always been a strategically important region for Sikorsky’s commercial business, and the regional fleet has grown significantly to 22 S-92 helicopters totaling more than 40,000 flight hours over the last decade, with nearly 15,000 hours in 2018. In addition to the impressive S-92 aircraft presence in Australia, the FSL is both positioned and equipped to support S-92 and S-76® aircraft throughout the Asia Pacific.

“We are seeing increased uptake of Sikorsky aircraft in the Asia Pacific region, across a range of industries. Relocating the FSL to Western Australia will improve wait times and increase efficiency for all our customers, which is a great outcome for us here at Sikorsky Australia,” said Rushbrook.

Since 2016, Lockheed Martin has made significant investment into Sikorsky’s commercial sustainment to support both the S-92 and S-76 helicopters, including in a 24-hour, state-of-the-art Customer Care Center in Trumbull, Connecticut, the opening of four Forward Stocking Locations world-wide, increase in the number of Sikorsky Field Service Representatives as well as the continued authorization of Sikorsky Customer Support Centers.

About Lockheed Martin
Headquartered in Bethesda, Maryland, Lockheed Martin is a global security and aerospace company that employs approximately 100,000 people worldwide and is principally engaged in the research, design, development, manufacture, integration and sustainment of advanced technology systems, products and services.