More frequent extreme heat events and marine heatwaves, an increase in extreme fire weather, and declining rainfall in the southeast and southwest of the continent are some of the key observations showing Australia’s changing climate, as detailed in the latest State of the Climate report released by CSIRO and the Bureau of Meteorology.

Drawing on the latest climate observations, the biennial report provides a comprehensive analysis of Australia’s climate and how it is changing.

Since 1910, Australia’s climate has warmed by just over 1oC, and sea surface temperatures in the oceans surrounding Australia have increased by around 1oC. 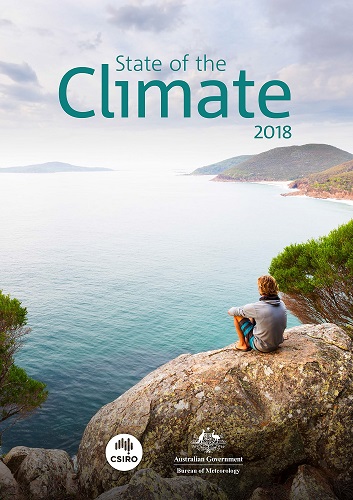 “In line with global trends, our data shows that Australia’s climate is continuing to warm, with eight of the 10 warmest years on record occurring since 2005,” Director of CSIRO’s Climate Science Centre Dr Helen Cleugh said.

“This warming is caused by increased greenhouse gases, such as carbon dioxide, in the atmosphere.

“Measurements taken over the past 40 years at Tasmania’s Cape Grim Baseline Air Pollution Station show that carbon dioxide levels in the atmosphere have been steadily increasing, with levels now consistently above 400 parts per million since 2016.

“Globally, carbon dioxide levels have increased 46 per cent since pre-industrial times (around 1750), and are likely the highest they’ve been in at least the past two million years.

“The main contributor to this observed growth in atmospheric carbon dioxide is the continued increase in emissions from burning fossil fuels.”

The Bureau of Meteorology’s Manager of Climate Monitoring Dr Karl Braganza said the warming trend in Australia was contributing to an increase in extreme fire weather and the length of the fire season.

“Monitoring of the FFDI shows there has been an increase in the frequency and severity of fire weather in recent decades.

“This trend in fire weather is particularly noticeable through southern and eastern parts of Australia.”

Dr Braganza said declining rainfall in the southwest and southeast of the continent was another key change to Australia’s climate over recent decades.

“While Australia’s rainfall is highly variable and influenced by major climate drivers, such as El Niño and La Niña, there has been a noticeable decline in rainfall between April and October through southern parts of the country,” he said.

“In 17 of the past 20 years, April to October rainfall in southern Australia has been below average.”

The report also provides projections for Australia’s future climate.
These include:

State of the Climate 2018 is the fifth report in a series published biennially by CSIRO and the Bureau of Meteorology, which together play an integral role in monitoring, measuring and reporting on weather and climate.

The State of the Climate 2018 report can be found on the CSIRO website.