ISACA / RSA Conference survey shows that cybersecurity is still seen as a technology issue, not a business imperative

Cybersecurity is now front and center on organisations’ boardroom agendas, but most chief information security officers (CISOs) have yet to earn a seat at the table. According to a study by ISACA and RSA Conference, 82 per cent of cybersecurity and information security professionals polled in the survey report that their board of directors are concerned or very concerned about cybersecurity, but only 1 in 7 (14 per cent) CISOs reports to the CEO.

This gap between belief and actions at the highest levels of management is playing out in an environment where 74 per cent of security professionals expect a cyberattack in 2016 and 30 per cent experience phishing attacks every day, according to the ISACA/RSA Conference State of Cybersecurity study. 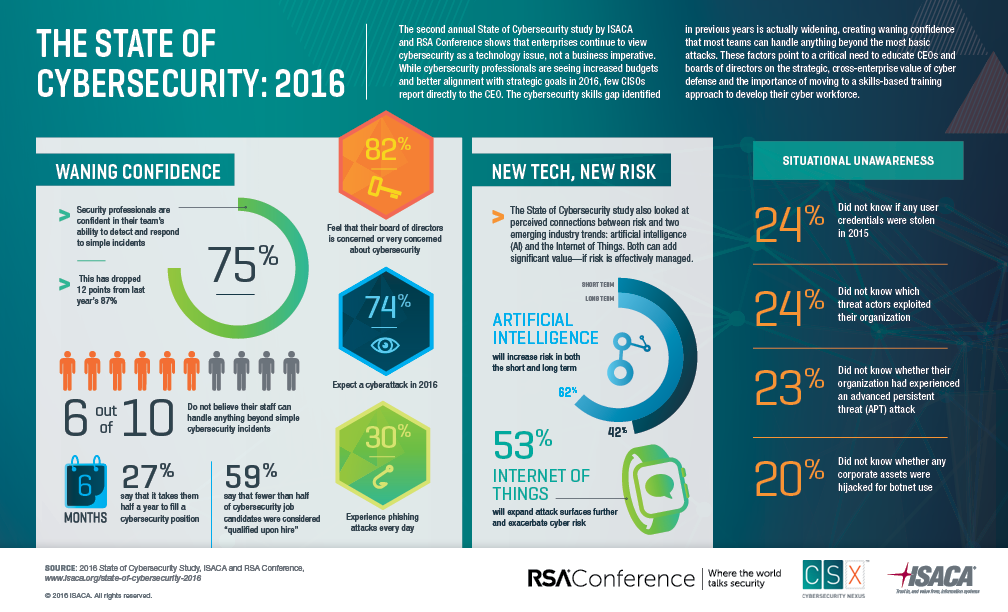 “While there are signs that C-level executives increasingly understand the importance of cybersecurity, there are still opportunities for improvement,” said Jennifer Lawinski, Editor-in-Chief, RSA Conference. “The majority of CISOs still report to CIOs, which shows cybersecurity is viewed as a technical rather than business issue. This survey highlights the discrepancy to provide an opportunity for growth for the infosec community in the future.”

The cybersecurity skills gap poses its own threat to keeping an enterprise safe. The past year saw a 12-point drop in the percentage of security professionals who are confident in their team’s ability to detect and respond to incidents, dipping from 87 per cent in 2014 to 75 per cent in 2015. Among those 75 per cent, 6 in 10 do not believe their staff can handle anything beyond simple cybersecurity incidents. In addition, the number who say that fewer than half of job candidates were considered “qualified upon hire” has risen from 50 per cent to 59 per cent in a year. Twenty-seven per cent need six months to fill a cybersecurity position, up three points from 2014.

With New Tech Comes More Risk
The State of Cybersecurity study also looked at perceived connections between risk and two emerging industry trends: artificial intelligence (AI) and the Internet of Things. Rather than viewing deep-thinking machines as their ally in detecting and combating cyberattacks, respondents believe that AI will increase risk in both the short (42 per cent) and long (62 per cent) term. Less surprising was that more than half (53 per cent) of respondents are concerned or very concerned that the Internet of Things will expand attack surfaces further and exacerbate cyber risk.

Situational Unawareness
The survey also highlighted a marked lack of situational awareness for professionals who report that cybersecurity or information security is their primary role:

Despite the fact that most CISOs report into an organisation’s technology function, this year’s study shows encouraging signs that cybersecurity does earn respect. Among those surveyed, 61 per cent expect their cybersecurity budget to increase in 2016 and 75 per cent say their organisation’s cybersecurity strategy now aligns to enterprise objectives.

ISACA created CSX to help address a growing worldwide cybersecurity skills crisis. CSX is a central location of cybersecurity research, guidance, certificates and certifications, education, mentoring and community. ISACA recently introduced skills-based training with performance-based exams and CSX certifications to help professionals build and evolve their careers in cybersecurity. Last year marked the successful debut to a sold-out crowd of the North America CSX 2015 Conference, dedicated specifically to cybersecurity. In 2016 ISACA is expanding the cybersecurity event to Europe and Asia.

Survey Methodology
The annual State of Cybersecurity study is based on online polling of 461 professionals around the world whose primary job function is cybersecurity or information security. These were drawn from an overall sample of 842 professionals who hold ISACA’s Certified Information Security Manager® (CISM®) or CSX Practitioner® designations or are RSA Conference constituents. The survey was conducted between November and December 2015 and has a margin of error of +/-3.5 per cent. Visit www.isaca.org/state-of-cybersecurity-2016  to see the full results.

About RSA Conference
RSA Conference is the premier series of global events where the world talks security and leadership gathers, advances and emerges. Whether attending in the U.S., the EMEA region, or the Asia-Pacific region, RSA Conference events are where the security industry converges to discuss current and future concerns and get access to the people, content and ideas that help enable individuals and companies to win, grow and do their best. It is the ultimate marketplace for the latest technologies and hands-on educational opportunities that help industry professionals discover how to make their companies more secure while showcasing the most enterprising, influential and thought-provoking thinkers and leaders in security today. For information on events, online programming and the most up-to-date news pertaining to the information security industry visit www.rsaconference.com.