The long-running dispute inevitably piled on further uncertainties that had been brewing across the world. 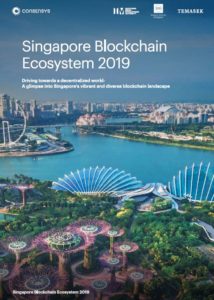 “During the Singapore FinTech Festival, the “Singapore Blockchain Ecosystem 2019” report was released by ConsenSys, researched and delivered with support from Infocomm Media Development Authority (IMDA), Monetary Authority of Singapore (MAS) and Temasek (investment company headquartered in Singapore), released during the FinTech Fest). This report gives an overview of Singapore’s vibrant and diverse blockchain landscape and will help to further showcase the substantial progress made by both public and private participants in Singapore.”

Trade partnerships agreements had undergone rounds of significant restructuring. Risks of a currency war escalated as India, Thailand, New Zealand caught many by surprise and cut interest rates in tandem. A scramble to recalibrate supply chains and relocate manufacturing bases led to incessant speculations of “winners” and “losers”.

Against this backdrop of disruptions, another development behind the scenes has the potential to transform global trade.

Blockchain, or Distributed Ledger Technology (“DLT”), is emerging as the technology to overhaul the broken trade infrastructure and in the process, redefine trade relationships.

We hear more from the Singapore FinTech Festival at the weeklong Singapore Week of Innovation and Technology (SFF x SWTICH) (11th -15th November 2019) –   organized by the Monetary Authority of Singapore (“MAS”), in partnership with The Association of Banks in Singapore, and in collaboration with SingEx Holdings; SWITCH is organised by Enterprise Singapore, the National Research Foundation (NRF) and Intellectual Property Intermediary (IPI) in partnership with SingEx.

This year’s festival, which saw impressive growth since its kickoff in 2016 – from 11,000 participants across 50 countries, to 60,000 across 130 countries today – was the go-to forum for central bankers, financial institutions, technology giants and startups for another reason.

Coming only a few months after Facebook’s proposed digital currency “Libra” running on Blockchain, and the Chinese leader Xi Jinping’s endorsement of blockchain as “an important breakthrough,” it was a rare opportunity to survey industry-wide sentiments on blockchain, and trade.

How is blockchain important in trade infrastructure?

A key problem that Blockchain aims to solve is the high costs and inefficiencies underlying cross-border trade and payment for goods and services.

A Singapore business paying its Philippines-based supplier in Pesos seems straightforward, but in fact, operates in a complex payment landscape plagued with opaque fees, processing delays, and tangled routes: Such a transaction typically requires multiple foreign currency transactions (Singapore Dollar to US Dollar to Philippines Peso), and multiple central and domestic banks, each running proprietary systems with unique local commercial and regulatory requirements.

The resulting architecture is a patchwork of myriad operating protocols and procedures that capture, process and store transaction information in different ways.

Not only is this setup costly (fee embeds foreign exchange commissions, operational costs, insurance against potential shortfalls), it is also tedious (transaction could take three to five working days), and non-transparent (tracing the status of payment is not easy).

Blockchain seems to be a silver bullet, not only because it is an open-source system operating on common standards built by industry consortiums and associations.

There is also, as Joseph Lubin (Founder, ConsenSys) put this succinctly at the FinTech Festival: inbuilt a “trust foundation” allowing “companies that have trouble working together can now build shared IT infrastructure on a foundation that they know cannot be cheated.” 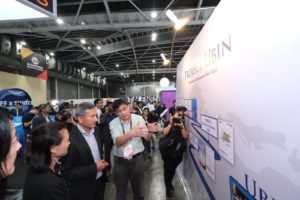 How does this “trust foundation”, referred to by Mr Lubin, work?

Blockchain, or distributed ledger technology, offers participants access to the same view (“distributed”) of the historical record of information (“ledger”).

Governed by a machine-based consensus protocol, new or amendments are appended to the record (forming a “chain”) only when the majority of the participants agrees (“consensus”).

Tracing the origins is simply backtracking the chain. Monitoring status of an update is merely accessing the latest chain.

“Everyone involved in the transaction chain knows what has happened and when it happened,” David Rutter (Founder & CEO, R3) explained at the FinTech Festival.

This transparency, together with “immutability” – cryptography locks the chain, establishes a tamper-proof record of information – guarantees provenance, predominate to trust. 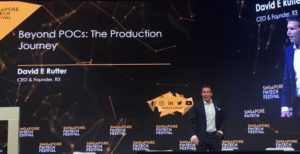 In other words, the chain, powered by lines of code, acts as a trusted source and custodian of information.  Manual interventions are kept to minimal, such as for adjudicating exceptions.

The implications are multifold.  It removes the need for a central authority to act as trusted custodian (“disintermediation”), and the need for manual reconciliation.  “Cost savings, streamlined process, reduced complexity” are the benefits of the technology, said Mr Rutter.  With world trade exceeding USD 20 trillion [1] the savings to ease cross-border payments are significant.

It could also help to restore trust and reduce losses in the USD $9 trillion trade [2] financed by credit (“trade finance”). Operating on paper-based letters of credit, bills of lading, warehouse receipts, this sector is highly vulnerable to fraud. Qingdao, for example, used fraudulent warehouse receipts and fake certificates for aluminum and cooper resources to raise funds including loans and letters of credit. When exposed, banks and trading houses lost an estimated $3 billion, and the chairman was handed a 23-year jail sentence.

By putting the papers on a blockchain, shared record-keeping and increased visibility could mitigate tampering and fraud.

What are some examples?

While these trade finance blockchains have “gone live”, cross-border payments blockchains are largely protypes – such as MAS’ “Project Ubin”. Kicked off in 2016, it had successfully developed prototypes for domestic interbank payments and cross-border payments with multiple parties using different DLT networks across jurisdictions (e.g. with Bank of Canada’s “Project Jasper”).

Such prototypes require the digitalization of the country’s currency, which many central banks are not yet convinced that the “benefits will outweigh the costs” – according to Banks for International Settlements (BIS) [3], and may explain the slower pace. 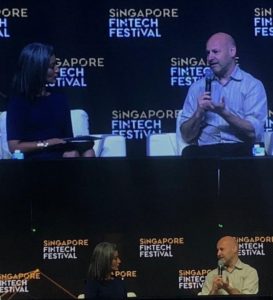 One such platform is Union Bank of Philippines and ConsenSys’s Project i2i (cited in the “Singapore Blockchain Ecosystem 2019” report released during the FinTech Festival [4]) which fosters financial inclusion through cheaper remittance fees and real-time connections to hundreds of rural community banks across the country’s many islands.

“The hype is over and we are seeing more blockchain applications going live everyday,” Mr Rutter asserted.

The technology, however, is not without bottlenecks, for example, to defend against cyber security attacks.

“People tend to think that blockchain applications are secure by design. This is a bit of misconcept. Blockchain is indeed a secure technology, but as every technology it is implemented by people who tend to make mistakes” Mr Pavel Pokrovsky (Blockchain Security Team Manager at Kaspersky) said at Blockshow 2019 (concurrent event during FinTech Fest).  Further, “applications built on top of blockchain often bring in threats, that lead to sensitive information leak, denial of service and so on. That is why it is important to provide application security assessments for blockchain applications at the same level, as for any other application”

High profile security breaches included the July 2106 DAO (Decentralized Autonomous Organization) attack, where hackers drained 3+ million Ether coins by exploiting a bug; or theft of the private key, which happened to Bitfloor exchange in 2012: “last night, a few of our servers were compromised … the attacker gained accesses to an unencrypted backup of the wallet keys” and “took the vast majority of the coins BitFloor was holding on hand.”

At the FinTech Festival, Mr Mu Changchun (Director-General, Institute of Digital Currency, People’s Bank of China) expressed concerns on other well-known weaknesses – scalability, network storage capacity, privacy.  These maybe the reasons that the Chinese central bank remains technology agnostic despite Chinese Leader’s endorsement of blockchain. “Technology cannot be the whole answer in the design of a proper central bank currency and the reduction of cost in cross-border payments. Cost is incurred due to governance, AML, KYC, and security measures”, he said.

In contrast, Bank of England’s governor Mark Carney, caused a stir at the annual Central Banking conference in August 2019 with the view that new currencies could emerge enabled by blockchain: “technology has the potential to disrupt the network externalities that prevent the incumbent global reserve currency from being displaced.” 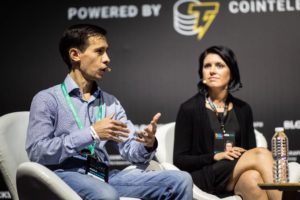 So, will blockchain lead to new currencies for exchange of goods and services, transforming trading relationships?

For many, this is a question of great interest.

History points to trade evolving from bartering for food and tools, to exchanging through metallic coins and paper bills, reflecting the resources available and the technologies to extract the resources.  The desirable characteristics of the medium of exchange – such as portability, durability divisibility – also shifted as societies expanded, mobilized and spread.

Examples are the widely-used British pound during the influential days of the British East India Company but was overtaken by the US dollar as the British empire declined. Or cigarettes which had broad demand during the resource-scarce war periods, as Professor David Lee pointed out at Blockshow Asia 2019.

Key to the medium’s wide acceptance is its representation of value, which could be linked to its intrinsic property, exemplified by gold. Perceptions of value could also be intangible, such as “the phrase In God We Trust on the American dollar”, said Prof Lee.  It serves religious and nation binding purposes; but for many, the phrase also holds an implicit guarantee of stability of value.

However, the 2008 Financial Crisis (GFC) led to the erosion of many currencies’ values and trust, and triggered debates for other reliable alternatives.

One that runs on blockchain which enables peer-to-peer exchange through machine-run consensus and cryptography, and dilutes concentrated centralized decision making, is seen by enthusiasts as restoring trust. 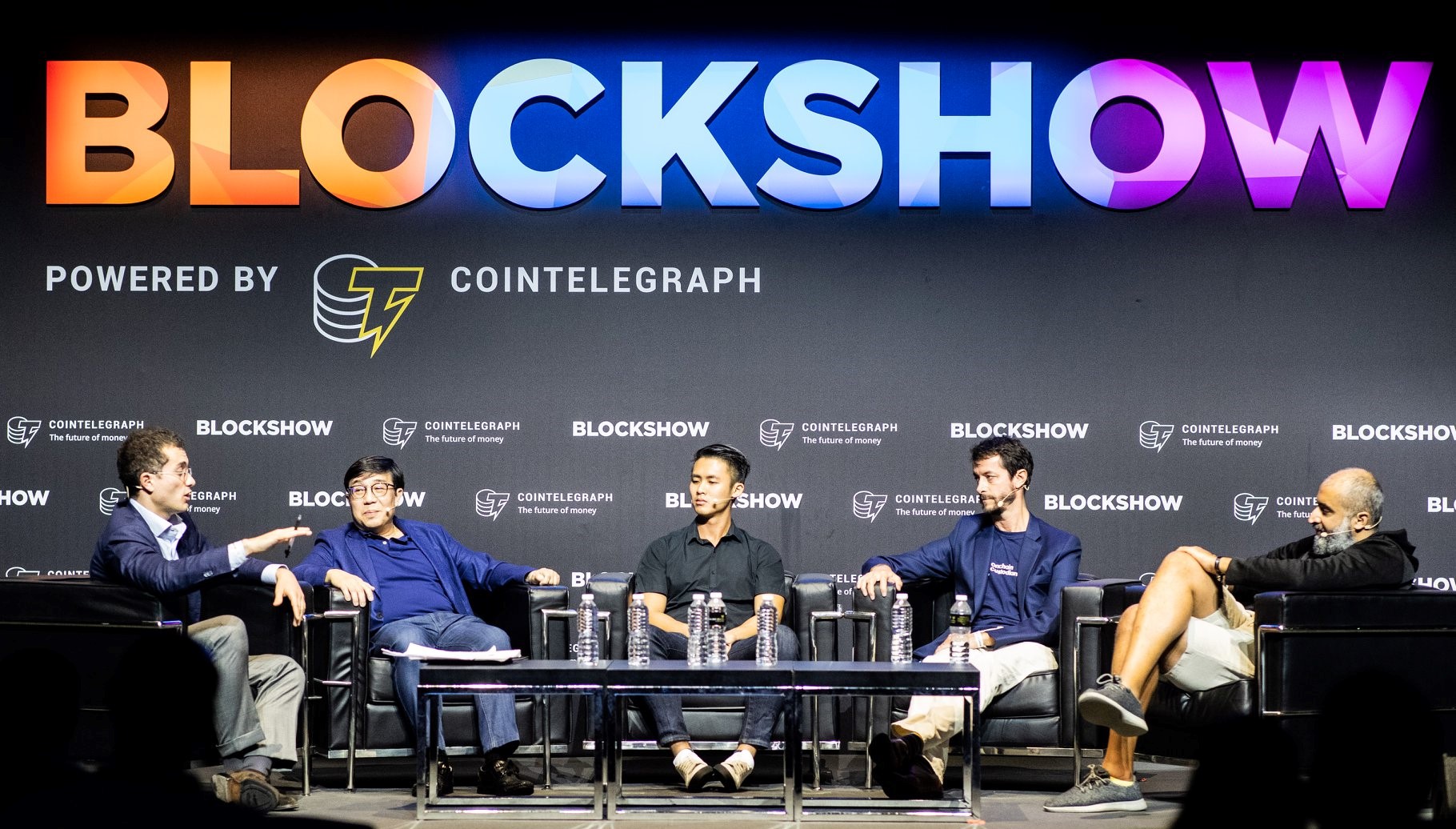 Bitcoin is one such example, which emerged as a popular solution to the problems behind the GFC.

To accept new mediums of exchange on blockchain, Prof Lee asked: “how much value do you place on cost savings and efficiencies and other benefits from disintermediation through machine-to-machine communication?”

Are we ready to “trust” a medium of exchange, where there is no clear accountability, without recourse to claims backed by guarantees (however implicit) or intrinsic properties? Will our perceptions of value linked to human decision-making evolve to one that assign value to information managed by lines of machine code?

The answer is not yet clear, and for many, wide-scale adoption remains a distant future.

While blockchain has matured over the last few years – free from the money-laundering accusations hauled at Bitcoin, the scams associated with Initial Coin Offerings, the negative publicity arising from crypto hacks – scalability is a significant issue. Its most recognized offering, Bitcoin, operates at less than 10 transactions per second, less than 1% of the existing payment networks’ capability.

Several high profile organisations have left Facebook’s Libra consortium since its announcement to create a new coin, further casting doubts on the imminence of blockchain disruption.

Moreover, what happens if a cyber denial-of-service attack render the blockchain inaccessible? Compared to metallic coins and paper bills, questions on its reliability as a store of value are yet to be resolved notwithstanding efforts in strengthening custodianships, and many remain cautious in taking the leap of faith.

[2] According to a global survey by the International Chamber of Commerce, as much as 80 per cent of global flows of merchandise – worth about US$9 trillion – is financed by some form of credit, guarantee or insurance.

[3] Study by BIS (owned by 60 central banks, representing countries from around the world that together account for about 95% of world GDP) – “Proceeding with caution – a survey on central bank digital currency January 2019”.