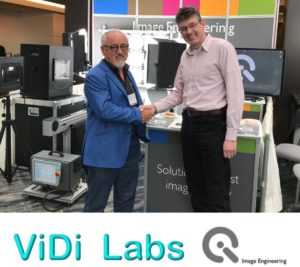 ViDi Labs has announced it has signed an agreement with Image Engineering from Kerpen-Horrem, Germany, to represent and distribute their products and technology in Australia, New Zealand and South East Asia region.

Image Engineering is one of the most respected imaging and testing labs in the world, offering a range of camera and optical measuring test charts, devices and software for all types of cameras, starting from photography, cinematography to mobile phones, automotive and surveillance cameras. Image Engineering customers include companies like Apple, Zeiss, Mercedes, BMW, Audi, Sony, Sigma, Leica, and many more.

Vlado Damjanovski stated, “I have been working with Mr. Dietmar Wueller, the CEO of Image Engineering, for the past few years during the development of the new C with the IEC technical committee TC-79, workgroup WG-12. This agreement comes as a natural evolution of our similar ideas and desires to make our industry more professional and accountable for the products and services it offers.”

ViDi Labs has been producing test charts and various tools to assist the industry in their systems design and camera evaluation since 1995. Starting from the very first CCTV test chart at the back of the first edition of Vlado’s first book “CCTV”, to the programmable test pattern generator TPG-8, the analogue Camera Analyser EWM40, the SD/HD test charts and now the latest iOS ViDiLabs calc.

With the change of technology in the last 15 years, from analogue to digital and high resolution cameras, new and better tools are always required. The new IP VSS standards like IEC 62676-5 highlight these changes, and Image Engineering is one of the first companies to have implemented them. Measuring procedures and test charts are now fully compliant with the new IEC 62676-5 IP Camera Measurements standards.

Vlado added, “I am also pleased to inform that Image Engineering will expand the functionality of their IQ-Analyzer testing software to encompass measuring procedures for the ViDi Labs test charts, which have been used by many CCTV companies already. The ViDi Labs test charts will continue to be produced and will evolve in versions that will support these new measurement procedures. The IQ Analyzer is a very clever software which will do most of the camera critical measurements objectively and uniformly, thus not relying any more on the visual perception of the observer, as was the case with the analogue standards.

This agreement means that consultants, installers, integrators and products re-sellers from Australia, New Zealand, Singapore and the SEA region, will have the opportunity to either

“I am confident”, said Vlado, “that by offering such products and services to our surveillance industry – the industry’s quality and accountability of the IP VSS (CCTV) system design will go one more step up. No more need for guess work in various “camera shoot-outs” without using the standards methods and procedures.”