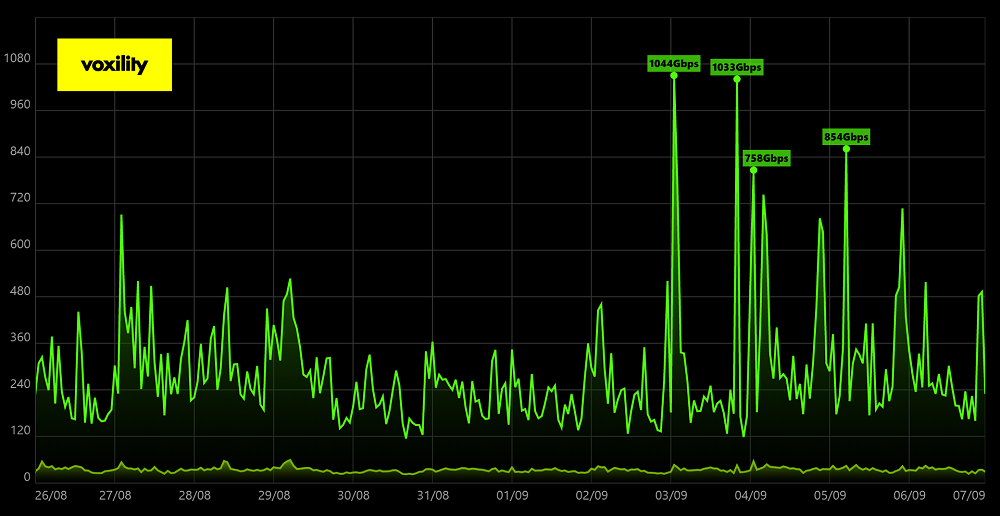 Voxility reports that it has mitigated multiple 1Tbps+ denial of service (DDoS) attacks on its customers’ infrastructure early this month. Its fully integrated anti-DDoS solution was able to protect its customers’ network infrastructure from depreciation in service or being taken offline.

The attack waves peaked at 1,035 gigabits per second (Gbps) and 1,044 Gbps on September 3 and September 4, 2020, accompanied subsequently by lower intensity attacks of 798 Gbps and 854 Gbps over the weekend. These were made up of volumetric UDP flood, comprising abnormally large UDP packets, DNS amplification, and UDP packets without payload, in an attempt to overwhelm infrastructure ports with IP traffic.

There were more than 600 different originating source IPs per DDoS event, with an average attack duration registered at around 15 minutes. The profile of the customer target was identified as a Hosting Provider with global operations.

“The motivations behind these waves of DDoS attacks are uncertain at this point. Whether they are caused by extortion attempts or simply seeking to disrupt the hosting provider’s operations, very large volumetric DDoS attacks are occurring often across networks,” said Maria Sirbu, VP of Corporate Communications at Voxility. “In August alone, Voxility saw more than 30 attack waves that surpassed 500Gbps in volume intensity, while at least six to seven events out of these where higher than 700Gbps. This is in contrast to what has been reported by website security companies in 2020 who have seen a more frequent, but lower-intensity attack landscape for DDoS.”

Voxility rents and sells hardware, network equipment, internet access and DDoS security services inside some of the best-connected data centres on the planet. The company operates its own global network, offering secure and dedicated Internet infrastructure and network services on a pay-as-you-go basis, within an environment where all major networks interconnect, allowing instant access to peering and cloud services. Leveraging direct access to more than 1650 BGP peers, Voxility is able to deliver top-notch DDoS mitigation services at a global scale with low latency and improved customer experience.

“Successful anti-DDoS is a continuous process and large DDoS attacks have to be proactively planned for, especially if you are a network operator. These attacks have only highlighted how critical it is to have a scrubbing network behind your anti-DDoS setup, no matter how you decided to approach it,” added Sirbu.